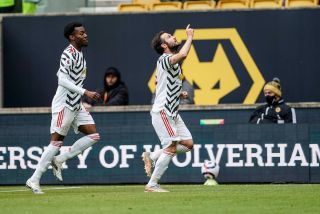 Juan Mata still doesn’t know what the future holds after scoring the winning goal from a penalty kick for Manchester United against Wolves.

The Spaniard’s contract at United expires at the end of the season – and it’s possible that today he made his final appearance for the club.

Ultimately, though, Mata’s future at Old Trafford is yet to be decided. In a separate interview manager, Ole Gunnar Solskjaer revealed that he is at least planning to discuss a new contract with the playmaker.

The Norwegian coach made a number of changes to his starting XI to play Wolves today, and Mata made a rare start before converting from the spot and being replaced late on by debutant Hannibal Mejbri.

Mata addressed where his future may lie after the game in a post-match interview.

“I don’t know, I don’t really know. In three days we have an important game and that’s where my mind is, but I still think I can play good football and give a lot to the team and enjoy for many years playing football like today, that’s my mentality,” Mata told BT Sport, as quoted by Manchester Evening News.

“It is not the moment to speak about it. I know what I want and I’m happy with how I feel physically and mentally.

“I’m still hungry to play football for some years. The club knows that so let’s see.”