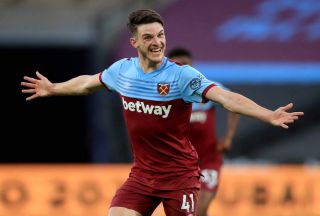 If Manchester United want Declan Rice this summer they are going to need to fight for his signature.

According to The Telegraph, Chelsea manager Thomas Tuchel is a fan of the West Ham midfielder, and he will recommend him to director Marina Granovskaia before the summer transfer window opens.

It was previously reported that Frank Lampard wanted the 22-year-old, but Rice to Chelsea speculation looked dead and buried when the former midfielder was axed as manager. Now his successor is looking to revive the club’s interest.

With Manchester United interested in Rice (intel backed up by our own sources), I find West Ham’s reported valuation a tad unsettling because there is no way we’ll spend £90m on him this summer. Complete and utter madness.

The midfielder recently made it clear that he wants to be playing in the UEFA Champions League (via MEN) — which could be made possible United next season.

Where have they got that figure from?

United will have West Ham knocking on their door over Jesse Lingard and then it comes down to where the player wants to go next, but I’m sure the fellow England international could be part of a deal as a makeweight to push it over the line?