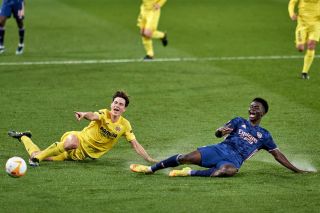 Recent reports would have you believe Manchester United have opened dialogue with representatives of Villarreal defender Pau Torres and are prepared to match the 24-year-old defender’s £50m release clause.

We could fluff this up, but it’s good to report the truth and there is absolutely no reason for Reds to get excited about the prospect of Villarreal’s centre-back joining United this summer.

Everybody will get a close look at Torres when United face the La Liga side in the Europa League final on May 26. A strong performance could always make United think twice, but as of now there is nothing to report on the situation bar the fact the Reds have not pursued the player for the last few months.

That’s according to Stretty News reporter, Leah Smith, who reveals the feeling inside Villarreal is much the same. They are not expecting approaches until the Euros are concluded this summer.

The club have not pursued the player for the last few months.

The feeling inside Villarreal is much the same – the club are not expecting approaches until after the UEL final and summer Euros.

Raphael Varane would be my pick out of all the centre-backs United are being linked with ahead of the transfer window. Whether a deal is possible or not remains to be seen.

More when we have it.