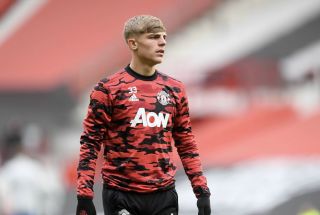 Manchester United full-back Brandon Williams is facing a hugely significant summer. The young English full-back, who has barely featured all campaign, is desperate to rack up some vital game time. However, with the Red Devils seemingly favouring other defensive options, Williams has been left out in the cold wondering how he can reignite his stagnating career.

Williams, 20, has spent his entire playing career with United after joining their youth academy when he was a young boy.

After impressing in the club’s youth sides, Williams saw his status surge as he forced his way into the side’s senior first-team plans during the summer of 2019.

Going on to make his senior debut in September of the same year, the young Englishman, who has represented his country at all youth levels, went on to rack up 34 appearances, in all competitions, over the course of that campaign.

However, despite the initial excitement surrounding what appeared to be the club’s next breakthrough prospect, this season has seen Williams frozen out of Ole Gunnar Solskjaer’s plans.

Having made just three Premier League appearances all campaign, it’s fair to say the 20-year-old’s development has been stopped dead in its tracks.

With the summer transfer window now just weeks away from opening, United’s young full-back knows he must feature more next season.

A close club source has revealed to Stretty News that there are a plethora of top-flight clubs, including Southampton and Brighton and Hove Albion all keen to offer Williams the game time he requires.

After the club refused to sanction a loan move last January and going on to assure the player he would feature more often, the 20-year-old was left with no choice but to stay.

However, after being left bitterly disappointed that his game time has failed to increase, we understand that Williams is now growing increasingly more frustrated and would like to seal a loan move this summer.