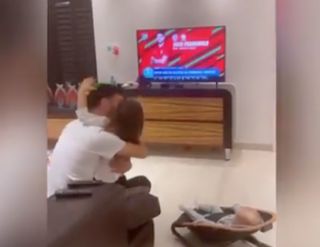 In the video below, you get to see Bruno Fernandes hear first about his call up to the Portugal national squad for the European Championships.

It won’t come as a surprise to anyone – maybe bar one or two.

In the clip doing the rounds on social media, the Manchester United midfielder is seen alongside his daughter, reacting to the exact moment in which his name was announced as part of the squad, along with former United star Cristiano Ronaldo.

Bruno Fernandes reacts to his Portugal #EURO2020 call-up with his daughter 🥺❤️ pic.twitter.com/JueHFD0Orh

Portugal stand a very good chance at winning back-to-back European Championships but France will be among the favourites as the World Cup champions welcome Karim Benzema back into their squad. That, of course, spells bad news for United star Anthony Martial who misses out again.

We’ll be rooting for Fernandes this summer but it’s a shame to see Nani won’t be playing at the tournament.