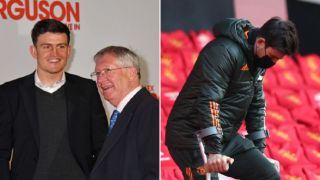 Harry Maguire is in a race to be fit for Manchester United’s Europa League final next week in Gdansk, Poland.

We still don’t know how serious Maguire’s injury is because Ole Gunnar Solskjaer has kept his cards close to his chest. The manager hasn’t even made it clear if Maguire will be fit for the European Championships this summer, although I don’t think Gareth Southgate needs to worry about that just yet.

Our focus is on winning the Europa League and that becomes more of a task if United need to start the game next Wednesday without their skipper.

Maguire has his faults but there is no denying that United are stronger when he’s at the back than Eric Bailly and Victor Lindelof.

The defender suffered an ankle ligament injury in a recent win over Aston Villa and he is expected to miss the Premier League clash away to Wolves on Sunday.

However, Maguire was spotted last night at the premiere of ‘Sir Alex Ferguson: Never Give In’ at Old Trafford on Thursday. He shared a tweet showcasing a picture of him and the great Scot.

The legendary manager was in attendance for the first screening of the new documentary — along with Solskjaer and several other United stars.

Maguire was pictured walking down the red carpet without any support mechanisms.