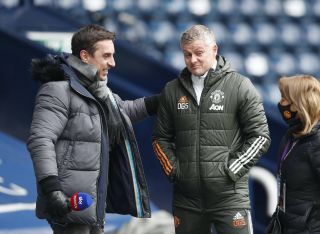 Gary Neville has predicted that the starting line-up selected by Ole Gunnar Solskjaer for tonight’s Premier League clash against Fulham will be the same side he picks for the Europa League final versus Villarreal.

Manchester United are hosting Fulham at Old Trafford, where there are 10,000 fans in attendance – for the first time this season. They were gifted a wonderful strike in the first half as Edinson Cavani opened the scoring before the 20-minute mark.

A win for the Red Devils would be enough to secure second place in the Premier League. Then the focus can turn on the Europa League final, with just one more league fixture remaining.

Neville believes that the same side named against Fulham will take to the field against Villarreal.

“I’m wondering whether this actually could be Manchester United’s Europa League final team. It wouldn’t surprise me,” he said on Sky Sports, as per Manchester Evening News. “It would not surprise me because Rashford on the right doesn’t work and I think Pogba will play. I think Cavani will start up top, with the three in midfield that are set.

“I just wonder if Ole Gunnar Solskjaer wants Tuanzebe to play in that Harry Maguire position as left centre-back and Victor Lindelof stays on the right-hand side. I wonder if that is the team, he’s not going to admit it.

“I think he (De Gea) will start in goal. You think about the service he’s given to the club and the fact that Henderson has been number one – I just wonder if this is the actual XI we’re going to see in the final.

“Greenwood is going to play on the right, you can’t play Rashford on the right, he doesn’t work on the right as well. Rashford is the only one I’m nervous about, would you leave him out? But, the balance is better. You can’t see Pogba being left out.”

How do you think United will line-up in the Europa League final? Let us know in the comments section.