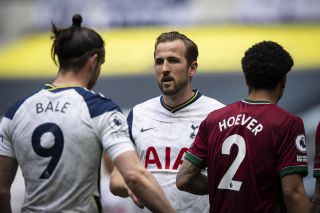 Harry Kane’s future at Tottenham Hotspur remains up in the air and Sky Sports wants you to believe the striker is at war with Daniel Levy.

They will need something to talk about when the football season ends. Sky will talk up transfers, always keeping Sky Bet’s best interests at heart, and play on narratives whether they have substance or not.

Manchester United are one of the clubs heavily linked with a move for Kane. He’s the type of player you want your club to sign when it’s clear he wants to move, but Ole Gunnar Solskjaer needs to address other problems in his squad first.

I believe signing Kane would significantly strengthen our chances of winning the Premier League next season. Having someone bag 30+ goals is a huge bonus – on top of Bruno Fernandes and Marcus Rashford.

We can be happy Edinson Cavani is staying for another year – but I still wouldn’t say no to Kane. Who in the right mind would?

Former Manchester United academy graduate Luke Chadwick is eager to see United respond to this potential move by getting Kane to sign the dotted line.

“My heart’s hoping he ends up at Manchester United,” Chadwick told CaughtOffside.

“He’s done an unbelievable job at Spurs over the years, but wants to go on and win silverware, so my head says he probably will go to Manchester City – a team that creates so many chances and who’ll be losing their talisman in Sergio Aguero this summer.

“I just feel like it’s a good fit. Spurs obviously know he’s going to go, albeit they won’t want to sell to another Premier League club, but money talks at the end of the day.

“I’d love him to end up at Man United but I think his most likely destination is to end up with Pep Guardiola at Man City.

“The only player you could bring in to compete with a signing like Harry Kane would be Erling Haaland. They’re different players but both score a huge amount of goals.

“The only way you could respond to Kane joining City would be signing Haaland. Obviously there’s Kylian Mbappe but I don’t see that happening. Haaland’s obviously the other one part from Kane who could give United the goals they need to win the league.”

Chadwick is also a fan of Jadon Sancho, with the Borussia Dortmund winger featuring in United’s gossip columns yet again.

“Obviously Sancho’s a wonderful player, but goals win games,” Chadwick added. “It’s got to the stage where Cavani looks like he’s being relied on as the number one striker at the age of 34.

“I’m sure he’ll have a wonderful influence on the squad again next season, but I think the days of him scoring 25-30 goals a season are behind him. If City were to get Kane, it has to be someone of a similar quality who’d be competing to win the Golden Boot next season.”