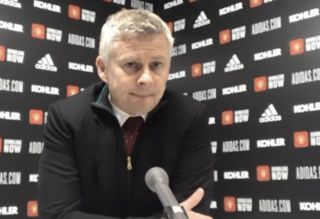 Manchester United manager Ole Gunnar Solskjaer issued a fiery response to a reporter who quizzed him over his decision to field David De Gea during Tuesday night’s Premier League clash against Fulham.

United’s goalkeeping situation is well documented and while it is relatively unique to have two genuinely top-tier shot-stoppers both vying for a starting spot, Solskjaer appears to have the situation under control.

Often gifted both De Gea and Dean Henderson runs in the side, Tuesday night saw the Spanish international in between the sticks again.

Speaking after Tuesday’s game, when quizzed about his selection choice, Solskjaer had a no-nonsense response for a reporter who may not have had all his facts in order.