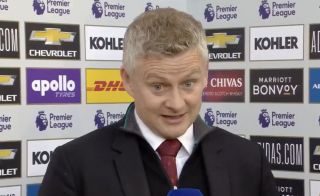 Manchester United manager Ole Gunnar Solskjaer has admitted that his side’s poor home form at the end of the current season has been a cause for concern.

United are preparing to face Spanish side Villarreal later this month in this season’s Europa League final.

However, the Red Devils’ dire home form in the lead up to what will be the side’s biggest match in quite some time, has been far from ideal.

After taking just one point from a possible nine from their last three home games, including a draw against Fulham on Tuesday, Solskjaer has acknowledged that the side’s performances must improve.

🗣”We need to sort a few things and stop trying to be the world beaters.”

Ole Gunnar Solskjaer answers how concerned he is about Manchester United’s recent form going into the Europa League final pic.twitter.com/nLRjQE65zi