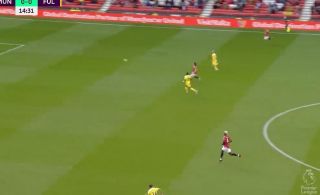 The execution was perfect.

We can definitely celebrate it – after VAR deemed it fine to stand.

It was an incredible moment for Edinson Cavani, playing in front of United fans for the first time, to score an absolute peach of a goal against Fulham.

United players had been enjoying themselves in the opening minutes – passing the ball around comfortable, and a few flicks here and there…

Now they have a lead to build on – not just defend.

What a goal to welcome the fans back!