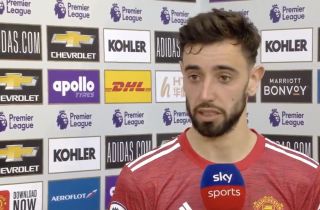 United booked their place in this season’s final following an 8-5 (on agg) victory over Roma.

The Red Devils’ final against Villarreal is now just eight days away and Ole Gunnar Solskjaer would have been hoping to carry with him some momentum.

However, following just one win in their last four matches, including a poor 1-1 draw against Fulham on Tuesday, there are growing concerns the Red Devils are stumbling their way to Gdansk.

Speaking after his side’s dire result against the already-relegated Cottagers, Fernandes has addressed those concerns and insisted the team’s form will turn around.

🗣”This problem will change.”

Bruno Fernandes is not worried about Manchester United’s recent form with the Europa League final on the horizon pic.twitter.com/dnnVRqosc5