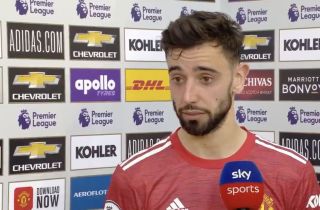 Coming into the game, manager Ole Gunnar Solskjaer named a strong starting lineup, with Gary Neville even predicting Tuesday’s side could be the one that will face Villarreal in the Europa League final, later this month.

However, despite facing an already-relegated Fulham side, the Red Devils were unable to claim all three points and instead had to settle for a 1-1 draw.

However, there were two positives to take away from Tuesday’s game – the first being Edinson Cavani’s stunning chipped opener and the fact Old Trafford welcomed fans back.

Speaking after the game, Fernandes took the time to assess his team’s poor result but was also quick to reiterate just how much he’s missed the United faithful.

🗣”We missed them, but we don’t give them the result they want.”