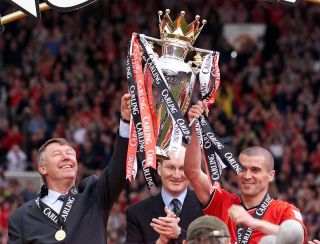 You can’t argue with this one either.

We asked – not long ago – who would be the next Manchester United legend to be inducted in the Premier League Hall of Fame after Eric Cantona.

The Frenchman joined the list that already consists of Alan Shearer and fellow compatriot Thierry Henry, but a former team-mate of his own at Old Trafford has since joined the prestigious pile.

Roy Keane becomes the first Irishman on the list after winning seven Premier League titles during his time at Old Trafford. He was the ultimate captain, for me as a child following United and we’ll never see a player of his nature in the game again.

Accomplished and competitive, a fierce leader who defined the role of club captain

Nowadays he works as a TV pundit for the biggest football matches, forming an entertaining duo act with Micah Richards on Sky Sports.