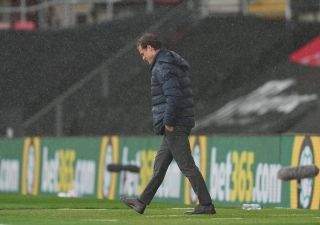 Manchester United will be looking at getting back to winning ways when they face newly relegated Fulham at Old Trafford in the Premier League on Tuesday night.

The Reds go into the game on the back of a bitterly disappointing 4-2 defeat to Liverpool at Old Trafford on Thursday night, whilst the visitors were defeated 3-1 by Southampton at St Mary’s last weekend.

Harry Maguire remains unavailable to face Fulham with the defender still struggling with an ankle injury. Anthony Martial also remains out injured as he battles to be fit in time for the Europa League Final in Gdansk next week.

Despite recent setbacks against Leicester City and Liverpool, victory against Fulham on Tuesday night would secure the Reds second spot in the Premier League table and in doing so guarantee their place in next seasons Champions League avoiding the qualifiers and in facing Fulham it presents United a perfect opportunity to do so.

Fulham have endured a poor season under head coach Scott Parker and their relegation from the Premier League was confirmed last week after losing 2-0 at home to Burnley, but despite being relegated Fulham are more than a match for anyone particularly at Craven Cottage.

The Reds away from this season has been terrific and if United can put in the same type of performance we have seen against Manchester City and Tottenham earlier in the campaign then United should have too much for Fulham and take all three points.

In what has been an up and down season for the Reds faithful finishing second is no mean feat and if Solskjaer can follow that by winning the Europa League then it would make this season a successful one for the club and would put the Reds in good stead for bigger and better things next season.