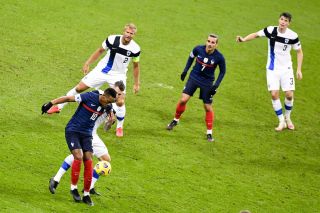 It will forever play on his mind, the fact he had been omitted from the France squad before their successful quest for World Cup glory.

Many would fancy their chances at the European Championships this summer, and despite stints in the national set up over the past year, Martial has yet again been omitted from France’s squad for Euros due to injury.

After announcing his squad, France manager Didier Deschamps said (via MEN): “Anthony Martial would have been here, but he is not available. His condition does not allow it.”

It’s a blow for Martial but he hasn’t played for United since the March international break – and it remains to be seen if he will be fit for the Europa League final versus Villarreal.

Even if he is fit to play next Wednesday, I think Ole Gunnar Solskjaer is set on Edinson Cavani as his centre forward.

Martial was not passed fit for Tuesday’s Premier League draw against Fulham.

Karim Benzema’s surprise inclusion can only give France a better chance at success this summer.