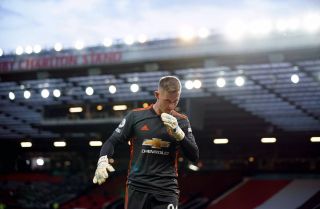 Top clubs across Europe look set to battle it out for Manchester United goalkeeper Dean Henderson, according to reports.

Henderson was left on the bench for Tuesday night’s clash with Fulham after an extensive run over David de Gea, who starts against Fulham despite his own future at United under a grey cloud.

The 30-year-old stopper could also get the nod for next weeks’ Europa League final against Villarreal, which would really raise doubts over Henderson’s future at the club. He will be forced into making a decision if Ole Gunnar Solskjaer is unable to promise the first-choice role next season.

Sky Sports list a number of clubs are being interested in Henderson, including Tottenham, Borussia Dortmund, Chelsea and AC Milan.

Henderson took over duties from De Gea in March, but it doesn’t look like his performance against Liverpool did him any favours.

Sky Sports adds that United are yet to make their keeper plans for next season clear.