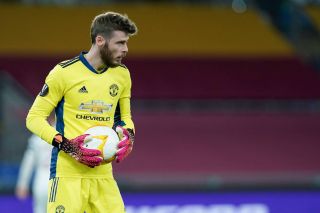 Manchester United will secure second place in the Premier League with a win over Fulham.

The match will be the first at Old Trafford attended by fans since the 2-0 win over Man City last season, in March 2020. 10,000 supporters have been allowed back into the ground and it’s likely that they will air their anti-Glazer views inside.

Fulham know before kick-off that they will be playing in the Championship next season. Their players will aim to restore some pride tonight with an upset over United, but we can’t see our lads being too troubled against the London side.

The team news is in and we see both David de Gea and Axel Tuanzebe in the starting XI.

Marcus Rashford gets a much needed rest which allows Mason Greenwood to star alongside Edinson Cavani.

Hopefully we’ll get to see more of Amad from the bench tonight.

Could this be De Gea’s final appearance at Old Trafford?

You can catch buildup to the game over on Sky Sports Main Event – also available via the Sky Go app.