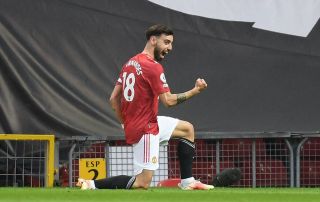 Bruno Fernandes has been crowned Manchester United’s ‘Player of the Year’ by winning the club’s illustrious Sir Matt Busby titled award for a second consecutive year.

Since joining the Red Devils from Sporting Lisbon in January 2019, Fernandes has become a catalyst for Ole Gunnar Solskjaer’s side and has led them to the Europa League final v Villarreal, with the final taking place next Wednesday.

Fernandes has enjoyed another terrific campaign and will want to top if off with a trophy – not just an individual award.

In all competitions this season, the Portugal international has scored 28 goals and registered 17 assists, so there’s no denying that he deserves to win United’s POTY award.

The Portuguese Magnifico has been a massively influential addition to the team.

Moreover, Fernandes emulates Ruud van Nistelrooy’s achievement of winning the Sir Matt Busby Player of the Year award in both of his first two seasons at the club. He becomes only the fifth man to retain the trophy and only he and the Dutchman have managed it in their first two campaigns at Old Trafford.

If only all signings could settle as quick as Fernandes. He’s a rare breed.