Like many the events over the last few weeks from the seedy 6 clubs of the Premier League trying to murder English football and take us into the European Super League, it’s ignited a fury in myself and fans throughout the country. No more so than in Manchester United fans who are definitely leading the way with protests against their owners.

This is my third article now on the protests and our ownership, and I cant see these slowing down until we have rid our club of these parasites.

I’ve been actively involved in all the protests at Old Trafford to date and other than an initial one at Arsenal, the response following the ESL backdown as been really poor from other fanbases. Liverpool, Chelsea and City fans — I’m talking about you lot here. Nothing short of a disgrace following the faux outrage outside grounds then just a whimper leaving United to carry the torch for English football. Whilst at the same time being used as click bait for the likes of talkSPORT and other journalists focussing on what will inevitably be collateral damage for the greater good. What short memories, morals and lack of backbone some people and fan bases have. Not something that can be directed towards United fans who I salute for every other red who joined me on those protests. United together in one common cause, enough is enough, we will not give in until changes are made.

I was stood next to the lady below on Thursday. A great woman to talk to Margaret Wallace from Salford, who had been a United fan all her life and it was her wish to get our club back before she leaves this world. Real passion and commitment. 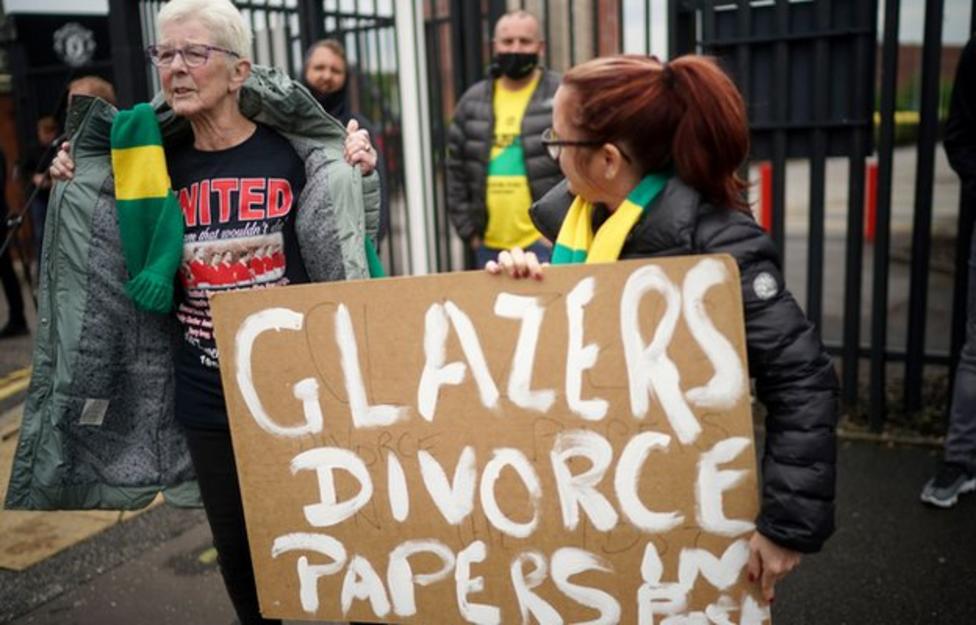 Protests at Old Trafford on Thursday before the Liverpool game

To get back to the topic of this article and considering the above, something hit me like a sledgehammer over the weekend watching Leicester win the FA Cup for the first time. Not so much the team, the reaction of their owner Khun Top (his father Vichai Srivaddhanaprabha tragically died in the helicopter crash in 2018). Looking on at the celebrations afterwards and then comparing them to our odious owners I couldn’t help but look on with a bit of envy. They are emotionally tied to the club. Everyone is pulling in the same direction, the players, the fans, manager, coaching staff, club and owners. It’s an obvious blueprint for success and yet we are saddled with the Glazers and the disconnect is that emotional attachment and the greed.

Being involved in the protests, we have some real good elements in our fanbase. Absolute fantastic people who have that emotional attachment. I’ve said it before in previous articles there is a real difference between a fan and supporter with levels in-between. The same red breed in theory, but a different species who has nothing in common with the match-going Red. They don’t care about ticket prices, games being moved to unreasonable times for travel or anything else. We have to keep the unity in our core fanbase to drive a change.

One word … the Glazers. What a horrible bunch after two forced apologies following the ESL debacle and a promise to engage with fans and rebuild trust. This is something that cant be achieved because there was never any trust there to begin with. A co-ordinated effort has led to itchy feet from sponsors with the recent withdrawal of Manchester based THG from the training kit deal worth £200 million. A hit on all official sponsors social media and trust pilot reviews have the Glazers back peddling and looking for answers no matter how disingenuous those responses may be.

Just look at the stark contrast of Khun Top celebrating with the team (above) to Avram Glazer who was asked to comment by a Sky reporter recently and arrogantly totally ignored the questions (below). The absolute state of our owners. We need to get rid of them.

On top of this many of United’s core fanbase are looking at the impact of these fan channels and tides are begging to turn on them. They constantly drive and push divisive agendas much of it aimed to marginalise match going reds in favour of their fickle global fanbase who they exploit with merchandise, membership, selling emojis and paying for super chats for them to read out. All from a demographic who don’t know any better and believe them to be the oracle of everything United. Even down to who the club are signing and passing this off as though they are in the know. The hardcore fanbase are the kryptonite to this model because they do know better and cant be exploited. Sound familiar?! Exactly the same modus operandi the Glazers have tried with the ESL and pandering to trippers and execs to fleece them in the megastore or corporate boxes. A concept that is alien to me and others and times have changed since these fan cammers were last around Old Trafford. I feel they will get more than a hostile reception when things do return back to normal. We want our club back.

The total contrast this week shown from good owners (Khun Top) and a bad owner (Glazers). Following the cancellation of the Liverpool game they have managed to turn Old Trafford into a fortress (not for footballing reasons it pains me to say) more like a prison. I think Gary Neville summed this up best:

Let’s be clear, what we’ve seen on that forecourt before is effectively Man United turned into a prison, it’s a devastating image for the Manchester United football club brand around the world, let’s just note that”. “You have to put prison walls up around your ground and have hundreds and hundreds of police officers at a game where fans aren’t attending; there is something that has gone badly wrong.”

Old Trafford turned into a prison

There was more of a police presence at Thursdays protests than there would be for a Liverpool game if all the fans were in attendance. This can’t go on, this must not be allowed to go on.

Also this week another ugly aspect is a supposed United supporter and convicted ticket tout ‘Rick The Red’ (Richard Rowe Snr) attending the FA Cup final. Watching two teams he has no affiliation with whilst at the same time taking a ticket away from one of those Leicester fans, who have waited so long for that magic moment that happened.

After the game he films himself slating off United in the hope if clicks and fake adulation from his less than knowledgeable followers who don’t know any different.

One of the most bizarre posts I’ve seen in what are bizarre times. There is so much wrong with this tweet it beggars belief. Football indeed needs a reset both in regulation, ownership and Im afraid to say our fanbase.

That reset is coming, Im sure about that.

2 responses to “Glazers – The good, the bad and the ugly of Manchester United’s ownership”