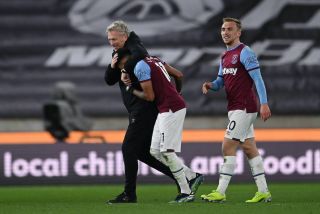 Jesse Lingard failed to make a single Premier League appearance for Manchester United before moving to West Ham on loan in January.

After 14 league games he has 9 goals to his name, and it sounds like David Moyes would like to keep him as part of his squad next season – with his future hanging in the balance.

The Hammers boss remains keen on keeping Lingard, but accepts that a big call rests with his parent club Manchester United.

Speaking to the media about West Ham’s summer transfer plans, Moyes said (via GOAL): “Jesse Lingard has joined a team in great spirits and were doing great things. He’s added to that and given another dimension too.

“We’ve enjoyed having him and I’m sure he’s enjoyed being here too because he’s given a lot. He’s been back in the England squad and I hope he goes to the Euros and we’ll find out in time whether he’ll be a Manchester United player or not next season.

“I’m not sure how realistic it is, Jesse has enjoyed himself I hope. He’s Man United’s player so they can decide what to do with him. If they let him go then I’d hope he’d consider us.”

The Hammers took a calculated gamble on the England international and helped him rejuvenate his career. Lingard had been frozen out of Ole Gunnar Solskjaer’s plans at Old Trafford and there’s no way he would be in contention for Gareth Southgate’s England squad this summer if he didn’t go out on loan this season.

Moyes’ men remain in contention for a top-four finish, and a Europa League spot at worst, so at least they’ve got European football to look forward to next term. They drew 1-1 with Brighton on Saturday.