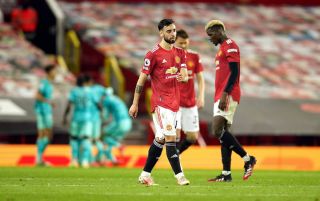 Bruno Fernandes says one of his “biggest regrets” since moving to England is not getting to sit down and chat with Sir Alex Ferguson. It’s not like the retired Scot sits at Carrington when he’s too busy condemning the European Super League.

The Portugal international wants advice from the legendary former Manchester United manager on how to improve his game.

Our talisman has inspired the Red Devils’ rise to second in the Premier League as well as progression to the Europa League final, but he would like to learn more from Ferguson to reach an even higher level.

When asked if he has had the chance to speak to Ferguson, who won 38 trophies as United manager, Fernandes told Inside United: “So, that is one of my biggest regrets in the club until now.

“I met him already but never had the chance to speak with him like I would like to do.

“I think everyone who watched Manchester United in the past remembers Sir Alex. [That is true] for me, growing up and seeing the club, being a fan of the club and seeing the development of the team.

“I would like to have a conversation with him and understand, from his point of view, what he thinks about me and what I can improve or still improve in my game to be better.”

Ferguson would have enjoyed working with Fernandes because he always wants to improve.

And, ultimately, he’s a team player.

In 78 appearances for United he has scored 40 goals and register 25 assists.

He was also asked to take an attribute from one of his United team-mates.

Fernandes continued: “I think I’m not the slowest player in the world but if I would have the pace of Rashy, honestly, I would be a Ballon d’Or [winner] already. With the pace he has, oh my God, he’s unbelievable.

“It’s incredible the way he is and, when I talk about pace, it’s about running with the ball and without the ball, and, at the same time, the pace in his feet. The quality he has, the moves he has and the agility he has to come away from difficult situations. It’s unbelievable.”