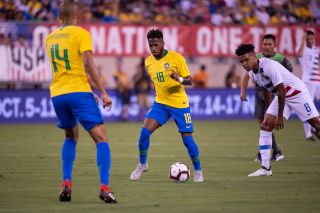 The FIFA 2022 World Cup Qualifiers for CONMEBOL will resume next month.

As a result, the Brazil national team has announced their roster for upcoming fixtures against Ecuador and Paraguay.

Manchester United midfielder Fred has been called up after playing a key role at United this season, with a Europa League final still to play. He hasn’t played for his country since 2018 and will be hoping to add to his 11 caps on the international stage.

Fred has been called up to the Brazil squad for games against Ecuador and Paraguay 🇧🇷🔴 pic.twitter.com/JPsv3z2UmO

No places for Alex Telles or Andreas Pereira.

The Brazilian didn’t enjoy a great evening as United were defeated 4-2 by Liverpool on Thursday night, with Roy Keane laying into the midfielder and his partner Scott McTominay for their below average performances.

They face Ecuador at home on Saturday, June 5, before then travelling to face Paraguay on Wednesday June 9, all in a bid to qualify for Qatar.