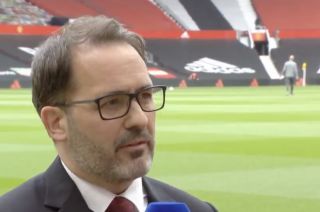 Manchester United’s director of communications Charlie Brooks has spoken out ahead of the Red Devils’ Premier League clash against Liverpool.

Speaking to Sky Sports, following what has been a turbulent couple of weeks, Brooks was asked to confirm the Glazer family’s stance on remaining at the helm of the English giants.

Unfortunately, and despite a series of tense protests in the lead up to Wednesday night’s game against Liverpool, when asked about the Glazer family, Brooks confirmed the US billionaires are unlikely to be going anywhere, anytime soon.

“I think people will be surprised to see the owners do understand and are committed to the club,” Brooks said. “They are here for the long-term and that they do have the club’s best interests at heart.

“I think this has been allowed to build up to a situation where people don’t acknowledge that. That’s not the case.”

“The owners do care about the club and are committed.” #mufc #mujournal