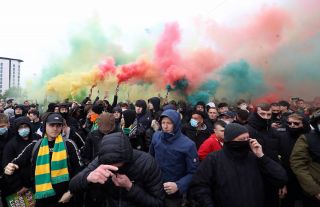 Greater Manchester Police have issued a statement after protests against the Glazer family at Old Trafford, reporting that two people have been arrested.

We are aware of a protest currently taking place outside Old Trafford football stadium, with a small number of people seemingly intent on disrupting the fixture.

Officers are in attendance to maintain safety while facilitating the right to peaceful protest.

Two arrests have been made relating to public order offences.

Assistant Chief Constable for GMP, Chris Sykes said: “WE have been working closely with Manchester United and partners to ensure those in attendance outside the stadium are kept safe while exercising their right to a peaceful protest.

“The safety of all those concerned remains GMP’s main priority.

“We encourage everyone to remember we are still living under restrictions due to the pandemic and have a collective responsibility to remain safe and protect one another.

“Enforcement remains our last resort, but anyone whose behaviour crosses the boundary into a criminal offence should expect to be prosecuted.”