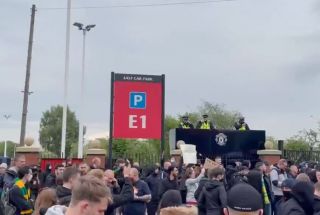 A heightened police presence and decoy tactics from both clubs have not scared off some Manchester United fans this evening, as they’ve continued their protests against the Glazer family.

Some images went viral on social media earlier showing the Liverpool team coach being blocked on its way to Old Trafford.

Daniel Taylor of The Athletic states via Twitter that the tires of the Liverpool bus had been ‘let down’, but Mark Critchley of The Independent has since updated us with claims that the bus has since moved on police moved to the scene.

The bus has left. Fans now on the move. pic.twitter.com/GupkroBxd9