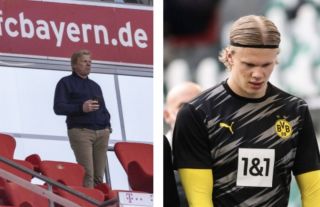 Manchester United, along with several other top European clubs, have been handed a boost in their pursuit for Borussia Dortmund striker Erling Haaland.

Haaland, 20, has quickly emerged as one of Europe’s most sought after prospects.

Following a monumental rise in recent times, since his arrival in Germany, the young Norweigan striker has racked up an eye-watering 53 goals and 14 assists in just 56 appearances, in all competitions.

So impressive has Haaland been, both domestically and in Europe, the 20-year-old has seen his name linked with a plethora of top-tier clubs, including Ole Gunnar Solskjaer’s Red Devils.

The striker’s situation is unique though – Haaland has a minimum release clause in place, believed to be within the region of just £68m, however, this clause will not become active until the summer of 2022 – leaving Dortmund with a decision to make this year.

However, despite the strong interest in the Norway international, one club who look to have removed themselves from the situation is Bundesliga giants and current Champions League holders, Bayern Munich.

Speaking recently to BILD (as quoted by Metro), soon-to-be CEO and club legend Oliver Kahn has lifted the lid on the club’s interest in Haaland.

“Sorry, whoever spoke about that didn’t understand the situation,” Kahn said. “A package that costs – as we heard – over €100m is unimaginable for Bayern at the moment.

“Robert still has a two-year contract here,’ the ex-Germany and Bayern goalkeeper added. ‘His performances cannot be questioned. He’s scored 39 goals in the Bundesliga so far this season! ‘Just for that, we don’t have to think about Haaland today. Robert can keep this level for a few more years.”