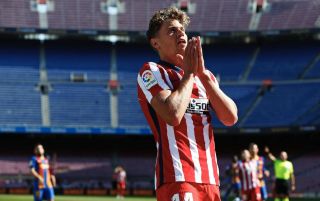 La Liga title favourites Atletico Madrid are believed to be so concerned that Manchester United could be preparing a £68m bid for Marcos Llorente that they’ve fast-tracked contract talks.

Since his arrival nearly three years ago, the Spanish midfielder has gone on to cement his place among Diego Simeone’s most trusted members of the squad.

Having featured in 34 La Liga matches, so far this season, Llorente’s impressive 22 direct goal contributions have helped see his side on the brink of claiming their 11th domestic title.

However, despite being one of the club’s most highly-rated players, it was reported by Marca earlier this year that Ole Gunnar Solskjaer’s Red Devils were keen on making a summer approach.

Although there was talk back then that Simeone’s side would not entertain any offers below the midfielder’s whopping £85m minimum release clause, more recent reports suggest the Spanish side are becoming increasingly more concerned about an official approach.

According to a written report in Wednesday’s edition of AS (via Sports Witness), Atletico Madrid fears the Premier League giants could be preparing to make a £68m summer bid.

Despite his contract not expiring until the summer of 2024, AS claim that in an attempt to fend off any interest, Atletico Madrid CEO Miguel Angel Gil has chosen to ‘personally handle’ Llorente’s contract renewal and has already met with the player’s agent several times.