According to recent reports, Manchester United are one of a handful of clubs ‘monitoring’ the situation of Santos teenager Kaiky.

After climbing his way through the ranks and following Lucas Veríssimo’s recent transfer to Benfica, Kaiky has since found himself thrust into the side’s first-team picture.

Plying his trade as a defender, although capable of playing either side of a centre-back pairing, Kaiky is right-footed and therefore, often lines up on the right-hand side.

Although still fresh-faced and still enjoying a commendable breakthrough period, having recently faced off against a tough Boca Juniors side, lead by former Red Devil Carlos Tevez, Kaiky was widely regarded as the best player on the pitch.

In fact, so impressive was the teenager during his side’s 1-0 win over Boca that the South American press ran with the headline “WANTED! Carlos Tevez. Last seen in the pocket of 17-year-old defender Kaiky”. 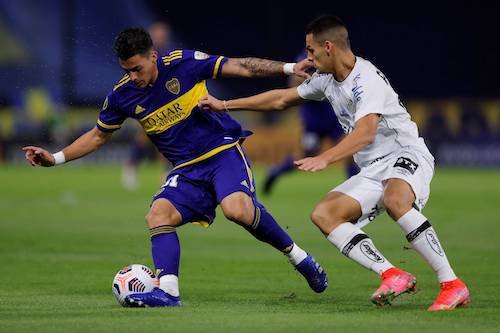 Kaiky, 17, was in action against Boca Juniors in the Copa Libertadores on Tuesday.

In light of what has been a hugely successful season for the Brazilian wonderkid, Kaiky is now seeing his name linked with a move to some of Europe’s biggest clubs, including United.

According to a recent report from Gazeta Esportiva, Premier League trio Arsenal, Chelsea and United are all admirers of the Santos teenager, with Ajax and Juventus also very keen.

All interested clubs are said to be ‘monitoring’ the youngster’s situation with a view to making a bid in 2022 – however, despite the initial interest, scouting has been temporarily halted due to COVID-19 travel restrictions.

Irrespective of this though, should the youngster end up making a move, he is expected to be granted a work permit due to how many appearances he has made in Brazil’s top-flight.

Read more: Massive boost for Man United as Bayern Munich rule themselves out of race for star attacker