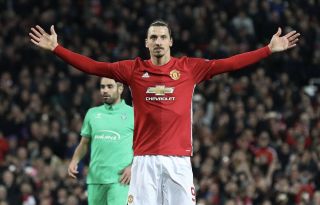 When it was announced that Zlatan Ibrahimovic would be joining Manchester United in the summer of 2016, you couldn’t help but feel excited and although his stay at Old Trafford was only short – he certainly didn’t disappoint.

Throughout his stay in Manchester, Ibrahimovic netted a total of 29 goals and in doing so helped the Reds win the Europa League and League Cup under then-head coach Jose Mourinho.

Having arrived at the club at the age of 34 there were doubts whether Ibrahimovic could even still do it at the highest level – those doubts were quickly squashed though, as the Swede made an instant impact at the club scoring the winner against Leicester City in the Community Shield at Wembley.

Further goals in the League against Bournemouth and Southampton followed as Ibrahimovic quickly settled into life at Old Trafford.

The goals continued to flow for Ibrahimovic as the season progressed and it was becoming increasingly more clear that the Swede was turning out to be a terrific piece of business for the Reds.

Signed on a free transfer from Paris-Saint Germain there can’t have been, nor will there ever be, any better bargains than Ibrahimovic – he was just superb.

It’s hard to pick just one highlight in the Swede’s time at Old Trafford but for me, his finest moment came in the League Cup final against Southampton at Wembley. Ibrahimovic scored twice, helping the Reds defeat the Saints 3-2 before going on to eventually lift the League Cup. It was a moment of real class and a moment that the Reds’ faithful will never forget.

After enjoying such a successful debut season, Ibrahimovic signed a new deal and agreed to stay with the club for another season – unfortunately, due to injuries, the 34-year-old failed to get his second season going – but this wouldn’t take away the impact Ibrahimovic had left at Old Trafford.

Ibrahimovic was a player you just got excited about whenever you saw his name on the team sheet.

It wasn’t just goals he brought to the team, he offered trickery, skill and the ability to produce a moment of magic in a game at any time.

He left you on the edge of your seat in the anticipation that something special would happen and there are few players that can do that.