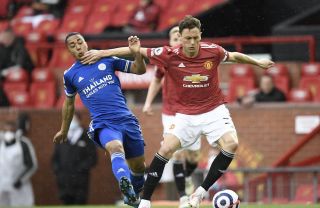 Coming into the game, manager Ole Gunnar Solskjaer was forced to navigate his way around four fixtures in just nine days.

Following his side’s 3-1 win against Aston Villa on Sunday afternoon, Solskjaer opted to name a much-changed side.

In fact, so many changes were needed, Solskjaer’s starting eleven against Leicester City saw 10 squad rotations, including a senior debut for wide attacker, Anthony Elanga.

However, despite naming a youthful and exciting attacking line-up, unfortunately for the Red Devils, they were unable to keep a full-strength Leicester City at bay and eventually lost 2-1 on the night.

However, the second half saw centre-back Caglar Soyuncu rise highest from a corner and head the ball past goalkeeper David De Gea.

Speaking after the match, experienced midfielder Nemanja Matic, who lined up alongside Donny van de Beek and Juan Mata, assessed his team’s performance.

“We had a good team today of course some young players got a chance with some experienced players,” the Serbian told BT Sport (as quoted by BBC). “We had a good balance. A set-piece decided the game.

“In some parts of the game we played some amazing football but we didn’t create enough to score a second goal.

“We had two days [to prepare]. We had some meetings, of course we are not happy with the result, but we played some good football. The youngsters did well and showed great character against a very good side.

“We have to deal with this situation. In two days we have another big game.”

Solskjaer will now be preparing his side for three more domestic matches, including a rescheduled game against arch-rivals Liverpool, before he travels to Gdansk, Poland, to compete against Villarreal in the Europa League final.