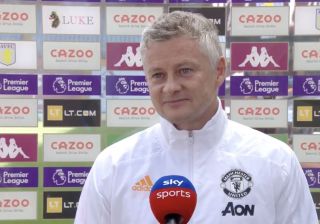 Manchester United manager Ole Gunnar Solskjaer has spoken out ahead of his side’s Premier League match against Aston Villa.

Sunday’s match is set to be the Red Devils’ first of four domestic ties in just nine days.

In what is the beginning of a truly gruelling up and coming set of fixtures, Solskjaer has reassured fans that his players remain totally committed to the cause and are just happy to play – regardless of how physically demanding the next few days will be.

“They’re looking forward to it, I think,” Solskjaer said. “I haven’t heard them moan at all. I am the only one who is moaning.

“They just want to play!”

Manchester United boss Ole Gunnar Solskjaer says he is the only one moaning about the fixture schedule and not the players pic.twitter.com/4HfLURz1dR