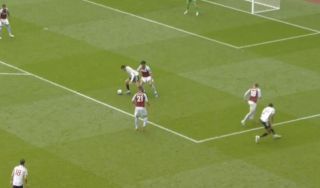 Having fallen behind in the game’s first half through an excellent Bertrand Traore strike, it has taken Ole Gunnar Solskjaer just 10-minutes of the second half to draw level and then take the lead.

United fans now owe both Fernandes and Greenwood a huge thank you as Manchester City are forced to put the title champagne on ice.