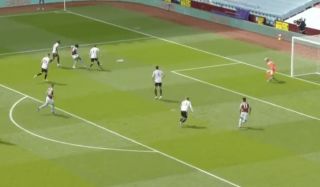 Despite starting the game much better, it has been the Red Devils who have fallen behind first.

Midfield duo Fred and Scott McTominay were both out-muscled and out-fought by the Villans’ frontmen before Traore fooled Victor Lindelof and then unleashed a devastating top-corner effort.

As it stands, arch-rivals Manchester City will be crowned champions and United will have no choice now but to up their game if they’re to delay the Citizens’ celebrations.

TRAORE WITH A BEAUTY! 😍

How about that for a finish? Bertrand Traore finds the top far corner from a tight angle ⚽️