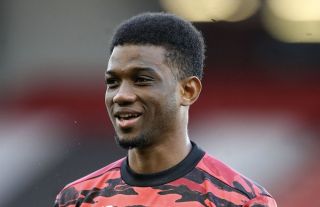 After arriving at Villa Park for Sunday afternoon’s Premier League match against Aston Villa, Manchester United youngster Amad reportedly got lost while trying to find his way around the stadium.

Despite missing out on his side’s midweek European clash against Roma, Amad has once again been left out of Old Gunnar Solskjaer’s first-team plans.

Seemingly unable to break his way into contention for a starting spot in the side’s senior first team, Amad has failed to even make the bench for Sunday’s domestic match.

Having arrived in January and almost immediately promoted from the youth side, fans would have been hoping to see a lot more of the young Ivorian – however, clearly, Solskjaer has other ideas as he looks to integrate the teenager slowly.

Hilariously though, after arriving at Villa Park on Sunday afternoon to support his teammates, reporter Simon Peach confirmed that the youngster had got lost and even wandered into the official press box.

A lost looking Amad just popped his head into the press box, so guess that confirms he’s not made the cut for the #MUFC squad 😆

Despite Amad’s misfortune at missing out on a place among his manager’s matchday squad, he could still have a part to play – the Red Devils have five more fixtures to play before the end of the season, including a Europa League final against Villarreal.