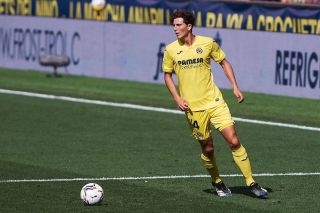 There will be a lot of eyes on Villarreal defender Pau Torres when Manchester United take on Villarreal in the Europa League final on May 26.

The Spanish defender has been heavily linked with a move to Old Trafford, with the Manchester Evening News reporting Torres would be open to a United move.

His intentions for the future will be put aside for the final, with both clubs looking to end what has been a difficult campaign with a trophy.

Torres got emotional in his post-match interview and was quoted by TMW after Villarreal’s goalless draw against Arsenal (2-1 aggregate).

He said: “Tonight I cry tears of emption instead of disappointment. Villarreal have lost many chances in the semi-finals but now we are finally in the final. We did it! These are exciting moments. Everyone deserves it: the club, the fans, the president, last year’s team, all of us. It’s time to have fun but it’s important to get ready for the final right away because it’s a historic opportunity.

🗣️ "Tonight I'm crying tears of emotion instead of disappointment. Villarreal have missed out on so many semi-final chances to reach the final but now, finally, we've done it!"

“Now Manchester? We will face a great team that will surely make things very complicated for us. We didn’t want both European finals to be entirely English. It is fantastic that Villarreal will represent Spanish football in a European final.”

Arsenal’s only goal in the semi-finals came from a penalty kick, so Torres and his team-mates will be happy with their defending throughout the tie. They will have a bigger test trying to keep Edinson Cavani and Bruno Fernandes quiet.

I would imagine United’s scouts will all be watching how Torres plays in Gdansk.