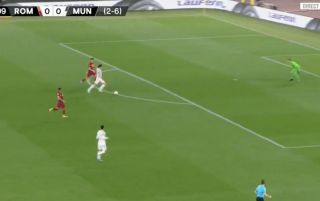 Edinson Cavani is something else. Although he missed a good chance earlier on, his finish for United’s opener was different class.

He gets into the best positions and he’s strong enough to guide past most defenders.

United take the lead on the night to make it 7-2 on aggregate, with our place in the Europa League final secured from this point.

An emphatic finish from Edinson Cavani! 💥

That flick from Bruno 🤤 pic.twitter.com/R1PSnvFdGB

Great play between Bruno Fernandes and Fred in the centre.

AS Roma had chances but United don’t look threatened by the Italian outfit, despite testing David de Gea on several occasions.

Nothing to worry about.