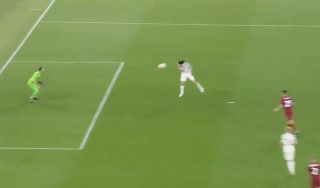 Manchester United, despite a second-half wobble, are going to Gdansk.

Coming into Thursday’s Europa League semi-final second-leg against Roma, the Red Devils carried with them a 6-2 lead.

A first-half goal from Edinson Cavani more or less sealed the Italians’ European exit, however, a valiant second-half fightback would have had fans slightly worried.

Two quickfire goals made it 2-1 to the home side, but just minutes later, United’s South American number-seven popped up with the goods, yet again.

Cavani, who is now averaging over a goal every game for United, has sent his side into this season’s final which is set to be played in Poland next month.

That’s two on the night for El Matador! ⚽

The delivery, the movement, the finish 😤 pic.twitter.com/FvHMW5UxQS