Edinson Cavani deserved the elation and adulation from travelling Reds in Rome but for now he will have to settle for online admiration.

How Manchester United fans would love to give him the reception he warrants at Old Trafford if he decides to renew his contract for one more year.

Cavani now has seven goals in his last six games and Ole Gunnar Solskjaer has reached his first final as United manager.

Four of those strikes came in this chaotic Europa League semi-final tie against Roma, who ultimately succumbed to three world class attackers in Paul Pogba, Bruno Fernandes and, of course, Cavani.

The Uruguayan veteran scored another two at the Stadio Olimpico; both were preceded by splendid movement before ruthless finishes.

He could have had two more, but he can save those for Gdansk as United face Villarreal in the final in three weeks time.

Cavani remarkably ended the tie with involvements in seven of United’s eight goals and opened the scoring in both games.

See Cavani’s stats from the Roma fixtures below, via StatmanDave and Utdreport.

4 goals & 2 assists in the tie. 🤯 pic.twitter.com/ArrEgEEKi5

Edinson Cavani against AS Roma in the #UEL semi-finals:

4 goals
2 assists
1 penalty won
Involved in 7 out of 8 goals scored
Broke the deadlock in both games pic.twitter.com/yrEtWntC7O 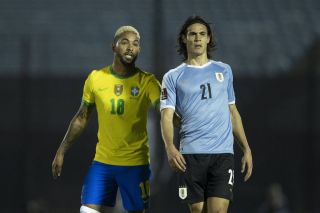