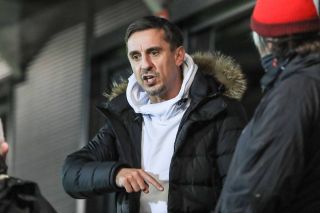 Ole Gunnar Solskjaer and his coaching staff are understood to be unhappy over Gary Neville’s apparent role in the anti-Glazer backlash at Manchester United.

That’s according to the Daily Mail…

How bizarre when the Glazers only have themselves to blame.

The Sky Sports pundit was widely praised for his criticism of the attempt to form a breakaway European Super League – which included the Glazer family, owners of Manchester United.

Former Crystal Palace chairman Simon Jordan has accused Neville of ‘calling on a lynch mob’, which is utterly pathetic considering what actually went down on Sunday.

The Daily Mail add that Solskjaer and his staff were upset over the postponement of the game against Liverpool and believe Neville needs to tone down his rhetoric to avoid further unrest. But those who actually prevented the game from happening weren’t taking calls from Neville. Far from it, in actual fact.

Neville is a United fan — just like all of us — and I reckon Solskjaer and the coaches are well aware of that. He too is allowed an opinion, even if it carries more weight than most.

Just another report I wish I didn’t any spend time on.