Footage from a Manchester United fan circling on social media appears to show security doing little to prevent supporters accessing the inside of Old Trafford at Sunday’s anti-Glazer protest.

Thousands of fans descended on Old Trafford and the nearby Lowry Hotel on Sunday to vehemently protest about the club’s Glazer ownership.

The protests led to the Premier League fixture between United and Liverpool being postponed, as players were blocked from leaving the hotel and fans gained access to the stadium.

Around 200 fans accessed the pitch and that led to inevitable questions about the level of security for what was a pre-planned protest.

Some furious protesters broke into a glass door to access one part of the stadium, that was not said to have direct access to the pitch.

But a video that has surfaced online shows stewards offering no restraint to supporters as they freely enter the grounds of Old Trafford via another entrance.

“You’ve opened the door, you’ve let them in,” one fan is heard shouting repeatedly to security before a door was eventually shut.

See the video posted on Twitter by @georgeb2003 below:

The stewards at #mufc letting fans into the ground. Yet according to the media we “broke in”. pic.twitter.com/jjNBW0WZ15 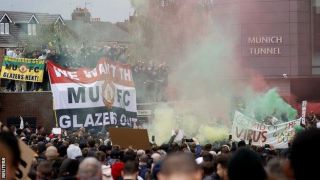