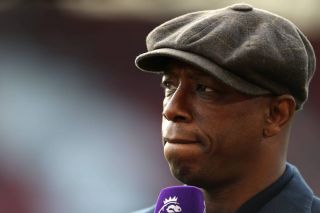 The former Arsenal forward suggested that the Red Devils could have one eye on the second leg of their semi-final meeting with Roma, despite the fact we hold a 6-2 advantage over the Serie A side.

But United already have Champions League football in the back and we’ve got one foot in the Europa League final. I highly doubt Ole Gunnar Solskjaer needs to be overly cautious about Thursday night’s game when it’s always important to beat Liverpool.

I would be concerned if we don’t see the right level of motivation from the team today.

However, Wright believes winning a trophy will be in the forefront of his mind.

“Even though you’d have to say Manchester United are going to make the Champions League, Ole Gunnar Solskjaer needs to win a trophy,” the Arsenal legend told the Kelly and Wrighty Show, as quoted by the Metro.

“I think that’s going to be in the forefront of his mind so I’m going with Liverpool. I think it’s vitally important for Liverpool to win the game because they need to get themselves back in the Champions League race.

“It’s good there’s so much on this game because there’s been a few draws recently and sometimes it hasn’t lived up to the hype. I think this one has got the potential to be very good.”

Liverpool have their injury problems still, so we can expect Sky Sports to go in heavy on that before kick-off.

A defeat for Liverpool would seriously threaten their Champions League dreams.