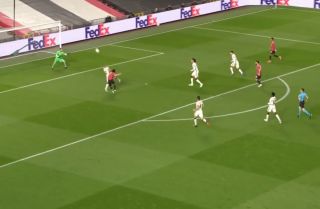 Edinson Cavani netted his 51st goal in UEFA competition tonight to give Manchester United an important equaliser at Old Trafford.

AS Roma went in at half-time with a 2-1 lead after canceling out Bruno Fernandes’ opener early on.

Although Cavani missed a big chance on goal before the break, he came out rejuvenated in the second half to give United an equaliser.

It was his eight goal in his last six appearances against Roma, as per WhoScored.

A fantastic strike and assist from Fernandes, too.

2-2 and counting given how this game is shaping up.