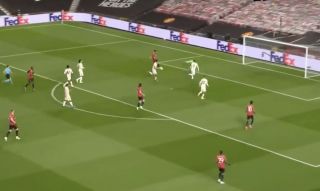 In what is a massively important first-leg as the Red Devils continue in their quest for major silverware, Fernandes has given Ole Gunnar Solskjaer a huge boost inside the game’s opening 10-minutes.

Some stunning link-up play between Pogba and Cavani saw Fernandes presented with the perfect opportunity to chip the Roma goalkeeper.

What an excellent move!