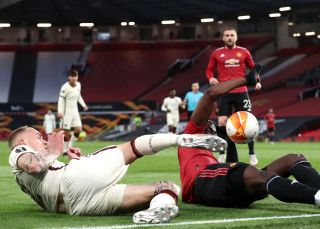 We are not going to try argue that the referee made the wrong decision. He didn’t – but that doesn’t change the fact Paul Pogba was unfortunate go give away a spot-kick.

It’s 1-1 and the first-half is underway at Old Trafford.

Manchester United opened the scoring thanks to Bruno Fernandes, who scored his 25th goal of the season.

Now Roma have an away goal to take into the second-leg, and I would want to see us push on to get a positive result.

Paul Pogba was sliding on a slippery surface trying to defend his penalty area when the ball struck his hand after being crossed towards the goal.

Lorenzo Pellegrini converts from the penalty spot to level the score.

Terrific pass from Henrikh Mkhitaryan in the build up 👏#UEL pic.twitter.com/fJXsyIU88t

Roma have just had to change their goalkeeper due to injury.