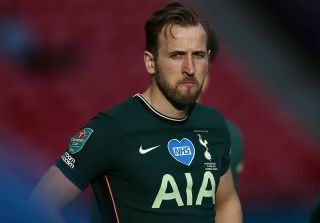 Tottenham striker Harry Kane has dropped a major hint over his future amid reportedly interest from Manchester United.

The two-time Premier League Golden Boot winner is one of the best finishers in the world, and despite Tottenham’s bang average campaign, Kane has still managed to score 31 goals.

Kane is a reliable source for goals so long as he stays fit. Goal, among other media outlets, have hinted at the possibility of him joining United this summer.

It is understood Kane is frustrated at Tottenham because they are no closer to winning silverware than they were under Mauricio Pochettino. In fact, it should be argued that they have gone backwards, all thanks to José Mourinho and an incompetent Daniel Levy.

Speaking after the London Football Awards this week, Kane dropped a hint over what his future holds by stating a desire to win team trophies.

Something Tottenham have not been able to do after losing the EFL Cup final against Man City last weekend.

“Individual awards are great, they are fantastic achievements,” Kane told the Evening Standard.

“When I look back at the end of my career, I will go over it and take in a little bit more. The goal right now as a player is to win team trophies. As much as this [award] is great, I want to be winning the biggest prizes that there is to offer as a team.

“We are not quite doing that. It is one of those [situations], it is bittersweet. I would rather be winning team trophies than this award. It is what it is.”

Perhaps Levy took his eye off the ball when appointing Mourinho because he was focused on helping lay the foundations for the new European Super League, which ultimately fell flat on its face.