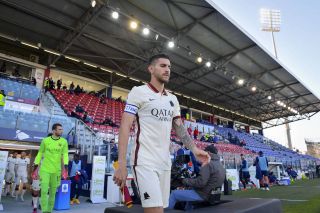 Ole Gunnar Solskjaer is aiming to end his wretched record in semi-finals when Manchester United take on Roma tonight – after overseeing four losses at this stage of competitions since getting the United job.

The Reds have eliminated Real Sociedad, AC Milan and Granada in the previous rounds of the Europa League this term, and now look to do the same against another Serie A outfit.

Marcus Rashford is available for Manchester United’s semi-final first leg in the Europa League versus AS Roma. Solskjaer says his forward is over the worst of his foot injury.

Luke Shaw appeared to confirm his stating role in tonight’s team during Wednesday’s press conference, with David de Gea expected to resume Europa League duties. That means the only significant absentee going into the match is Anthony Martial.

“I was going to ask Luke if he’d picked the team already!” Solskjaer jokingly said, as per Manchester Evening News. “We’ve managed Marcus and we’ve had to manage him quite a while actually.

“Last year with his back, then he had his shoulder, which he’s recovered really well from, and I feel he’s gone through the worst of his foot. He almost played a full game against Leeds and he’s available for selection for tomorrow. He’s happy with the progress he’s made.

“We didn’t lose anyone after the Leeds game, which was a great preparation for us because it’s a high-intensity, difficult game.

“I’m probably the luckiest manager in world football to have two such good options [between the sticks] and both of them have played more than 20 games this season and have been very solid.

“We’ve been building clean sheets, our record is getting better and better, they’re a big, big part of it. Both Dean and David want to lift a trophy, of course they do, whoever we go with has got the support of the team and his teammates.”

How can I watch Man Utd v Roma?

The game will be shown live on BT Sport 2 from 7:15pm – also available with a BT Sport monthly pass (no contract), while regular subscribers can also stream matches via the BT Sport website or BT Sport app.

Manchester United are favourites to win the Europa League outright, making Roma the underdogs ahead of this tie.

I can see the first leg being an edgy and close affair.

United have conceded just once from six outings in the Europa League and we have enough firepower to really hurt Roma in the first leg.

Chris Smalling will probably turn into Paolo Maldini on the night.