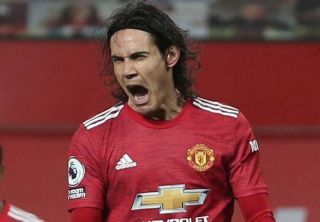 Edinson Cavani has posted a cryptic message about his Manchester United future on Instagram.

Cavani, 34, is out of contract at United in the summer after he joined on a Bosman last summer as PSG’s all-time top goalscorer.

The manager has made it clear that he’d keep Cavani for another season at the very least after the Uruguayan proved to exceed many people’s expectations at the club.

Still, I would issue some concern over the fact he hasn’t played as many games as we need from our leading centre-forward.

Cavani has 10 goals in all competitions and is expected to start tonight’s game against AS Roma in the Europa League semi-finals.

He has had his injury problems as well as a ridiculous ban issued by the FA.

Reports over a transfer to Boca Juniors are constant and Ole Gunnar Solskjaer has admitted it may be hard to keep Cavani for an extra year.

The striker’s latest Instagram post contains a cryptic message about his future. When we put it into Google Translate, it spat out: “The only thing I know is that I will give my best.”