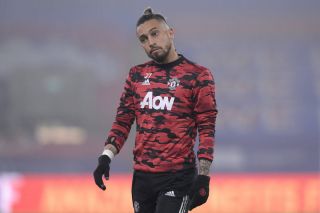 It doesn’t sound like Alex Telles will be starting tonight’s game against AS Roma, but the Brazilian left-back has issued a warning to Manchester united ahead of their reunion with former Man City striker Edin Dzeko.

Dzeko, 35, is expected to lead the line for the Serie A outfit and with that in mind our defence should be expecting plenty of high balls into the box.

The Bosnia international hasn’t the greatest record for goals scored this season – only scoring seven in 23 appearances – but his overall record with Roma is impressive (117 goals in 254 games + 52 assists).

Telles is aware of the fact Dzeko played for City, but he also has the experience of playing against him in the Champions League with FC Porto before joining United.

He said (via Manchester Evening News): “I know Roma are a quality team witg very good attacking players such as Edin Dzeko.

“[They have] players who create a lot up front. They’re also very good defensively, an experienced team, they aren’t in the semi-finals by chance, there’s a lot of quality in the team. I think they are going to be two great games.

“We’re going into the games well prepared and confident of doing our best.”

United have already eliminated one Italian side from the Europa League in the shape of AC Milan. They are currently fifth place in Serie A, with Inter Milan on course to win the title – while Roma are positioned ninth.

If we defend well, I can’t see us not going through.

“He [Dzeko] is a quality finisher,” Telles warned, “he knows how to score goals.

“You’re dealing with a centre-forward with real physical presence because of his stature. He’s a constant danger, so we need to concentrate. I believe we have a very strong and focused back-line to deal with this.

“We know facing a team like Roma in a semi-final that we’re going to be up against quality players and we have to be ready. I’m a big believer that important games are decided in the details. When we come to these moments, the team that’s most focused and prepared will win the game.”