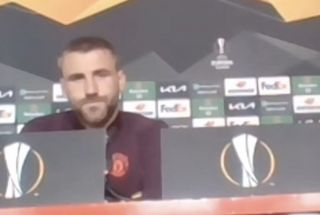 Manchester United left-back Luke Shaw has accidentally let it slip that he is set to start against AS Roma in Thursday night’s Europa League semi-final.

Speaking in a scheduled press conference on Wednesday afternoon, Shaw, when asked about how he feels facing the possibility of competition for Europa League gold, the English full-back may have said a little bit too much.

In a cheeky gaff, although perhaps unsurprising, Shaw appeared to confirm that he has been given the nod ahead of Alex Telles for Thursday’s game.

“Of course I want to be playing and luckily tomorrow I am,” Shaw said. “I am looking forward to it.”